“The central act of Francis was to respond to the word of God,” Fr. Henry Madigan, OFM Conv., reminded four candidates at the Rite of Profession on May 20 at St. Joseph-St. Patrick Church. Like the apostles, “Francis and companions received a call to extend the word of Christ and the love of God.”

Likewise, he said, those being professed as Secular Franciscans are accepting the call to bring Christ and the Gospels into their everyday lives.


It signifies “an inner change, which brings us to a reality of Christ” never experienced before.

“I congratulate you” for making yourselves “a gift not only to the church, but to God.”

Some 55 family members, friends and other Secular Franciscans were than asked to come up and individually congratulate the newly professed. 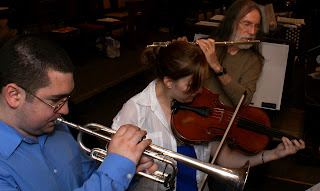 Providing musical accompaniment were:
• parish music director Andrew Siuta as organist.
• Joachim Nelson on the flute.
• Christine Mickey on the viola.
• Jason Rickey on the trumpet.

A reception in the parish center provided a festive conclusion to the day.

As Fraternity Secretary Marsha Kistner, OFS, put it:
“Today the Secular Franciscan Order was excited and humbled to admit four new members to the Order.”