UTICA -- Elizabeth "Betty" Frank, OFS, has been awarded the Franciscan Peace Award by the Saint Kateri Tekakwitha Region of the Secular Franciscan Order (Ordo Franciscanus Saecularis). "Our national theme is to 'Be a Bridge -- Accept All People As a Gift of God'," Mary Stronach, OFS, the U.S. international councilor, noted during an awards ceremony at St. Joseph-St. Patrick Parish Center Sunday (Oct. 27). "Betty Frank is that bridge."

Stronach, representing Regional Minister Kim Marks, OFS,  said Frank, a member of the order's St. Joseph Fraternity, was a "mover and shaker for the order and the church." She listed several accomplishments:

The Secular Franciscan Order is a Catholic order of single and married members who strive to follow the Gospel in the footsteps of St. Francis of Assisi. 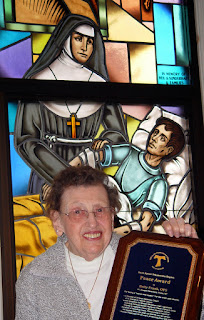 St. Joseph Fraternity meets at St. Joseph-St. Patrick Church on the third Sunday of the month, and is one of 27 fraternities in the St. Kateri Tekakwitha Region, which encompasses upstate New York and northwestern Pennsylvania. The regional fraternity is one of 30 belonging to the U.S. National Fraternity. The worldwide order is headquartered in Rome, Italy.


PHOTO: Betty Frank, OFS, poses with her Peace Award below a stained glass portrayal of St. Marianne Cope caring for a leprosy patient in Hawaii (in the chapel at St. Joseph-St. Patrick Parish Center, Utica, NY).
Posted by R Stronach at 4:01 PM