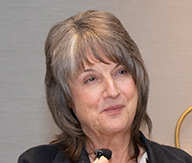 The Secular Franciscan Order in the U.S. recently honored a Detroit parish nurse with its "Justice, Peace and Integrity of Creation" Award.

At the National Chapter in St. Louis last October, JPIC Chair Carolyn Townes, OFS, introduced the 2018 JPIC Award winner, Kathleen Carsten, OFS, as someone who lives her life with “two feet of love in action.” With one foot, she meets the immediate need; with the second foot, she addresses the issue.

Convert and OFS member since 2015, Carsten has worked as a faith community nurse for St. Aloysius Church in downtown Detroit since 1999. She serves the health needs of the poor and homeless of the area. Kathleen has built a relationship and an understanding of the elderly of downtown Detroit and, especially those who lived at Griswold Apartment Building, where in 2013 elderly residents were facing eviction under new ownership (with an expired Section 8 HUD affordable housing contract). Many of the elderly had lived in their apartment for over 30 years.
Kathleen decided to do something.

“I contacted Dr. Garbette Garraway, a retired University of Detroit Mercy psychology professor. He also had a very active counseling practice. I shared with him the anguish of our elderly neighbors—he volunteered his time and expertise immediately to begin counseling the elderly residents.”

In the meantime, Kathleen discovered health issues due to renovations getting underway before the eviction deadline. It was the last week in January of 2014 and Kathleen was giving a routine health check-up to Johnny, one of the Griswold residents. He was having difficulty breathing in his apartment. There was dust everywhere. She called other residents and discovered that many of the elderly had chronic illnesses which were being exacerbated by the conditions in the building – filth, lead paint, elevators that were undependable – if available (one of the two elevators was dedicated to only construction workers.)

She made numerous complaint calls to the City of Detroit Building Department. She reached out to a St. Aloysius parishioner, Paul Novak, an attorney who volunteered his time. He and his staff met with about thirty residents and took their affidavits which were “more than enough to bring about a Verified Complaint for Injunctive Relief against Griswold Apartments.” On the same day that Paul and petitioners filed the complaint in court, the City of Detroit placed a “Cease and Desist” order -- all contract work had to stop.

Soon after, Kathleen and Paul met with Griswold residents, a construction manager and the building owner’s representative. In the seniors’ remaining three months at the facility, their physical health would not be further jeopardized. But their spiritual and mental health struggled from the lingering losses of close friends and community, and the rising anxiety of starting all over again. “Our work needed to continue,” said Kathleen.

The Senior Housing Protection of Detroit organization, known as SHP-D, was formed when the Griswold incident happened. Its focus was to make city planning and government officials aware of the plight of the poor seniors and to stress the need for continued low-income housing in Detroit.

Through this organization and through the work of Dr. Tam Perry, Wayne State University School of Social Work, her associates, the College of Nursing at Wayne State University, and St. Aloysius, the former residents of Griswold participated in research that revealed the effects of unplanned relocation stress (breaking up of social networks, grief, loneliness, trauma, lack of trust and whether older adults fit into a new Detroit).

The results of the efforts included:

* The new owners of two nearby Section 8 HUD apartments promised to keep the HUD contract for another ten years. Renovation of the apartments has begun, with seniors in residence. Careful attention has been made to make sure their health is not compromised by the construction.

* SHP-D has contributed to the City's Affordable Housing Strategy. Members of the coalition gave public testimony in support of the Affordable Housing Trust Fund established in September 2017 and an Inclusionary Housing Ordinance which mandates that 20% of new housing developments be classified as affordable.

* The work has also served as a training ground for young adult students in nursing, social work, and urban planning.