St. Joseph Fraternity celebrated 160 years by honoring individuals for work with the marginalized and by unveiling a saintly welcome sign.

“Welcome to Utica. The Home of St. Marianne Cope.”

St. Joseph Fraternity and City of Utica officials unveiled a street sign sporting those words, along with an image of St. Marianne, during the fraternity’s 160th anniversary celebration Aug. 18 at the Irish Cultural Center on Columbia Street (kitty-corner from St. Joseph-St. Patrick Church).

The fraternity donated four signs, which the city installed at the north, south, east and west entrances to Utica.

Marcus Phillips, the mayor’s chief of staff, said the city was glad to work with the Secular Franciscan Order.

“The reason is because the Catholic tradition, which St. Marianne Cope represents, is kind of what made the city what it is today” with “a spirit of giving” that propels the area’s generosity in fundraising and being open to immigrants and refugees. He also singled out city sign department supervisor Mark Sokolowski for expediting the project.

State Assemblywoman Marianne Buttenschon was on hand to present an Assembly proclamation, recognizing the fraternity as the second oldest in the U.S. (founded in March, 1859), and join in honoring several individuals for their charitable works.

Since Jo was in a nursing and rehab facility, he surprised her with the award via cell phone, and then the gathering sang “Happy Birthday” to her.

Stronach then presented the St. Mother Marianne Cope Award to three individuals:
Stronach expressed his gratitude to a community of lay Carmelites from New Hartford, which sent a congratulatory message citing “160 years of faithful service in the spirit and love of the Franciscan charism” and announcing a $400 donation in the fraternity’s honor to Mother Marianne’s West Side Kitchen. The message was signed by Diana Evans, president of the Community of St. Joseph the Protector, Secular Order of Discalced Carmelites (OCDS).

Stronach also quoted from a congratulatory letter from Tibor Kauser, OFS, minister general of the Secular Franciscan Order. Writing from Rome, Italy, he cited the fraternity’s “significant past” and “praiseworthy present” with its various ministries.

Katie Koscinski, OFS, a fraternity member who serves on the St. Kateri Tekakwitha Regional Executive Council, presented a gift on behalf of Regional Minister Alfred Picogna – a framed collage of congratulatory messages from fraternities across the state.

Rev. Richard Dellos, pastor of St. Joseph-St. Patrick Church, offered the invocation at the afternoon banquet, citing the beginnings of the Franciscan charism when St. Francis of Assisi heard Christ’s call to “rebuild my church.”

The celebration began earlier in the day with Mass across the street at St. Joseph-St. Patrick Church, where Franciscan friar Christopher Panagoplos, TOR, spoke of the fire of faith in a world that both subtly and overtly erodes Christian values and beliefs. He urged Christians to stand up for what they believe.

In his banquet talk, Father Christopher (a national spiritual assistant for the Secular Franciscan Order) referred to the polarization taking place in public discourse, where people of different viewpoints argue even to the point of hatred, rather than listen and communicate. Secular Franciscans have a role in countering such division.

“The heart of Franciscan living is relationship. Relationship with God, with others, and with creation.”

He added: “For St. Francis, fraternity summarized his radical living in solidarity with all of humanity and creation… Francis’ starting point rested in the faithful recognition of his relationship to the other.”

He pointed to St. Joseph Fraternity’s 160 years of striving to live the Gospel not only in the footsteps of St. Francis, but also in the spirit of St. Marianne Cope, who grew up in the parish.

“You have been and still are responding to immediate needs and specific situations: feeding the hungry, clothing the naked, caring for and healing the sick, visiting those in hospitals and prisons; focusing on people’s distress, focusing with empathy.”

A video message from Jan Parker, OFS, national minister of the Secular Franciscan Order, brought the celebration to a close, with her singing the Blessing of St. Clare, “May you always be with God wherever you may be and may God be with you always.” 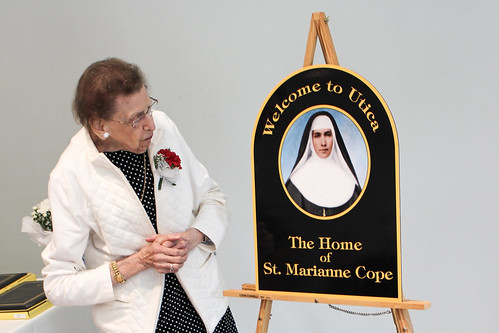